Let me start by clarifying something...

FEMINISM: (n.)  fem·i·nism \ˈfe-mə-ˌni-zəm\
1) the theory of the political, economic, and social equality of the sexes
2) organized activity on behalf of women's rights and interests

Ok, now that we've cleared that up... Regardless of your personal feelings, this past weekend's Women's March was a historic HERstoric day -- millions of women (and men) gathered together in solidarity across the nation AND world with the main focus being love, equality, and a willingness to stand up for what is right. I was fortunate to be a part of this beautiful movement, and I came home with this incredible high of empowerment and hope for a better tomorrow. And then, as it tends to do, reality set in.

I scrolled through my social media pages that were (gloriously) flooded with positive photos, articles, and stories about the Women's  March on Washington and all of its sister cities...that were then abruptly and brutally cut by anti-March posts. I gasped. I couldn't wrap my mind around the concept of someone being AGAINST this movement -- a peaceful, inclusive movement -- especially those that were women. How?? Why?! I could feel this tinge in my heart reading these words of disgust and disapproval. Questions began to swirl in my mind: "Do they not understand what this was about? That it wasn't ONLY about women, but also rights for LGBTQ+, immigrants, Muslims, working class, education, and the environment? Do they not know the difference between 'whining' and 'activism'?"

With all of these thoughts bouncing around in my head, I decided to take the time to read and re-read these negative posts in order to gain some sort of perspective as to where these comments were coming from. I had to keep in mind that these people have the same right to an opinion and a voice that I do, and they, too, deserved to be heard. And after careful review and quite a bit of processing and reflection, this is my personal opinion of why these people feel that the Marches are wrong/unnecessary/anti-men/whining/pointless/etc.:

Notice I did not say, "Those who didn't participate in or support the March are sexist, racist, homophobic, xenophobic, gun-toting, woman-hating, anti-feminists!" Because they are not one in the same. Just as those who did participate in these Marches aren't "men-hating, police-degrading, gay-agenda-pushing, handout-taking, godless baby-killing socialists" (to put it lightly, just based on things I've read). The main problem on this one particular matter isn't that one side is "bad" or "wrong"...the problem is that we don't understand each other. If you are anti-March, I do not hold any ill will towards you -- because I know the root of why is that you don't understand it. If you can relate/identify with the paragraph above, then I truly and sincerely congratulate you. I wish there were more people who felt the way you do. But unfortunately, there are not. In fact, there are far too many who have felt victimized, discriminated against, threatened to have their rights and freedoms taken away, scared for their future/the future of their children/the future of the planet, and harassed solely for loving who they love or being who they are. And with an administration that has built its platform on these very fears, it had to be big and it had to be now.

And honestly, I myself identify with a few of those statements -- as a straight, white, cisgender, middle-class, educated, American-born, Christian woman, that is part of my privilege. And there is nothing wrong with being born privileged (I repeat, there is nothing wrong with being born white/Christian/straight/American/privileged/etc.), as it cannot be helped...just as it cannot be helped to be born less privileged. The privilege itself is not what matters -- what matters is what you DO with that privilege. And by that, I mean you essentially have two options: 1) you can use your privilege to help those less fortunate; or 2) you can live life under the motto: "If it's not a problem for me, then it's not a problem." If you fall under the first category, then I think we're good here. If you fall in or around #2, then I'mma need you to have several seats and listen up...

I get it. I really do. Because I used to be like you. I used to live in my own little world and worry only about myself and those closest to me. "Racism isn't a thing anymore, right? I mean, I'M not racist, and I've never really experienced anyone else being racist. So...everything must be cool on that front." And yet, I've never seen a million dollars in my life, but I'm pretty sure it's safe to say millionaires do exist. Let me put it to you this way... "OUT OF SIGHT, OUT OF MIND" DOES NOT APPLY HERE. Just because you haven't personally experienced something, doesn't mean that it's not happening around you or that it's not a problem.

Have I personally experienced racism? No. But I have seen it firsthand and have had African-American friends tell me horror stories of situations that they have endured. Am I personally worried about having my marriage rights revoked? No. But I do worry that my best friend may lose his right to marry the man of his dreams. Do I personally fear being shipped off to another country? No. But I do fear for my friends that may have been born here, but risk losing their parents to deportation. I finally had my "wake up call" -- hopefully this can help serve as yours.


Although there are things that I selfishly fear for myself (women's health, education, equal pay, etc.), this March was never about me...or you for that matter. This was about something far bigger than myself or any one person. This was about walking the walk. This was about taking a stand for something I have always believed in, but was either too apathetic or too afraid to speak up. But then I realized that feeling compassion and empathy is only half the battle -- you also have to SHOW it. I know the world can be a scary place that can cause you to become cynical. And I know it's so much easier to sit in the comfort of your home behind your keyboard and criticize those that are actively trying to make a difference. But if you TRULY want this country to be great, you have to put in the work. You have to be willing to look past your front door, get out into the world, talk to people who aren't like you, and put out what you hope to receive. 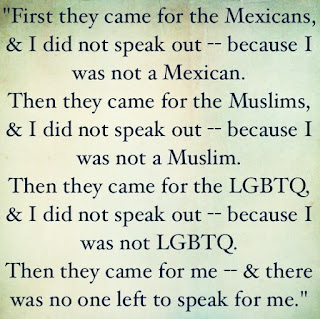 Posted by Living La Vida Lisa at 8:03 AM